All German-speaking freshly licensed, re-entrants, SWLers and „old hands“ are cordially invited to the 6th Icebreaker Round on January 7th, 2020.

YL Gudrun OE1OMA and OM Lukas OE1LHU (foto, below) organised and moderated this round. The rig is the VHF/UHF all-mode transceiver IC-910 and the antenna is shown below: it is a high gain vertically polarised triple band antenna (Diamond X-5000, antenna gain 4,5 dBi on 2m band, 8,3 dBi on 70cm band, and 11,7 dBi on 23cm band). 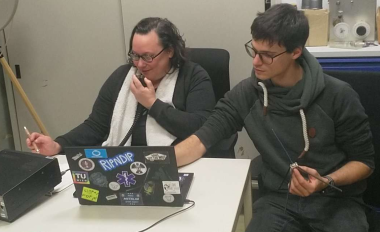 The Radio-Amateur-Klub of the TU Wien supports the practical part of the course Short Wave Radio Communication. In the practical part, students visit the shack and we demonstrate real-world global communication in analog and digital modes. The foto below shows the students of Group 1 in the radio shack on Monday Dec. 9, 2019. 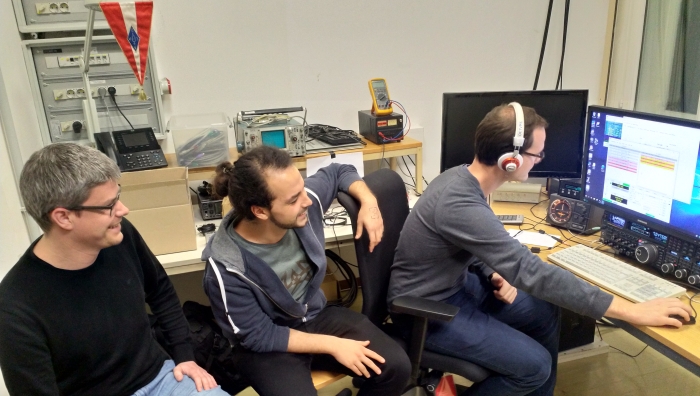 The CQ WW is the largest Amateur Radio competition in the world. Over 35000 radio amateurs battle on the waves during the last weekend of October (SSB) and November (CW). The goal is to make as many contacts with as many different countries and CQ Zones as possible. The game is set with a couple of agreed rules, the laws governing the propagation of radio waves, and the will of the sun.

The contest has a long tradition beginning with the first Radio magazine World-Wide DX Contest in 1939. The modern CQ World Wide DX Contest began in 1948.

As for the sun, there were no sun spots (SN 0) and the solar radio flux index was around 70. Surprisingly, the 15m band opened up and enabled contacts around the globe.

During October 26-27, we participated in SSB and during November 23-24, we were active in the CW contest. The OE1XTU Team consisted of Helmut OE1TKW, Arpad OE1SZW, Gudrun OE1OMA, Horia OE1BQH, Manfred OE4MQW, and Chris OE1VMC. The experienced OMs in the team (Helmut and Arpad) coached the younger team members into the deeper secrets of contesting: where, when, and how to hunt the precious multipliers needed for the team’s score. We managed to be on air for almost 26 hours as indicated in the chart below: active operators indicated by blue squares, off times are shaded in light green, additional team members in the shack indicated by ‚x‘.

Some fotos below give a glimpse of the fun and achieved results. 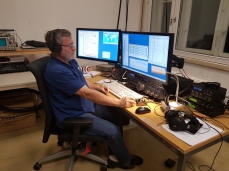 QSOs by band by hour

During August 2019, the 6m band opened and enabled rare sporadic-E propagation between Central Europe and North-West Africa. We were lucky and worked Algeria and Western Sahara in FT8 with our 6-element Yagi EF0606W1. designed by OM Ljubisa YU7EF. 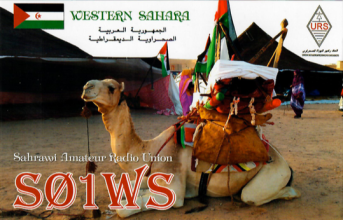 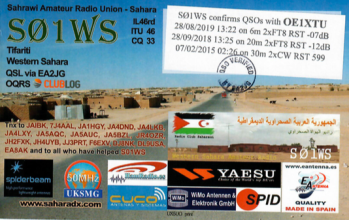 The Radio-Amateur-Klub of the TU Wien participates in the CQ World-Wide DX Contest with its callsign OE1XTU.  The „CQ WW“ is the largest amateur radio competition: Over 35000 hams compete on the short wave bands during the last weekend of October (SSB) and November (CW). The goal is to complete as many two-way contacts as possible in 48 hours with as many different countries as possible. 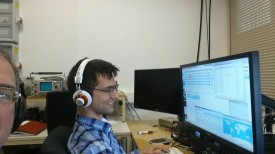 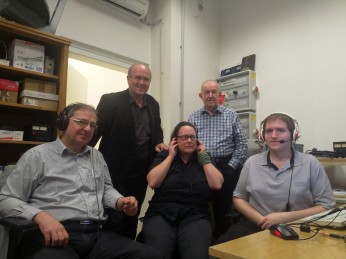 We take part as a high power station running 200W in the category Multi-Operator, Single Transmitter, Assisted. We will be on all HF bands.

The contest logger N1MM+ is installed and updated to the latest version, the newest master data have been downloaded and tested. We have pre-recorded our voiced CQ calls. The audio splitter (provided by OM Dieter OE8KDK) allows to connect for up to four headphones.

Previously, Manfred OE4MQW has worked on VHF and UHF only. On the short wave bands, he has some experience as an SWL only. During this contest, OM Manfred made his first QSO on short wave ever. Believe it or not, the QSO partner turned out to be OM Thomas N1MM who is the main developer of the contest logger.

Chris and Manfred were on duty during the late night shift from Saturday to Sunday working the low bands. During the last 5 hours of the contest, Arpad hunted a bunch of multipliers in the Caribbean. 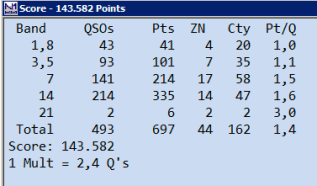 Emir OE1EMS, Stefan OE1ABU, and Chris OE1VMC repaired the mechanical parts which enable antenna rotation. After lowering the antenna to rooftop level, we changed the rotary mast. The new steel tube has a diameter of 60mm and 5mm wall thickness. That is a considerable upgrade to what we had before. Now, we are fit for this year’s CQ WW and the upcoming winter storms. Some pictures below. 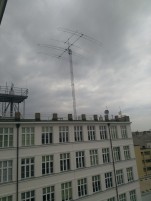 after the repair mission 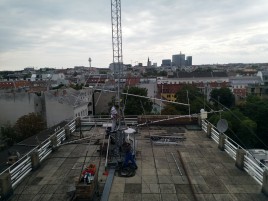 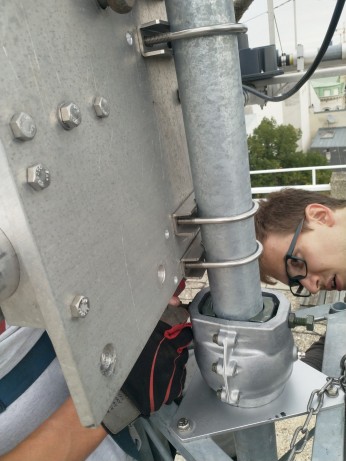 We took part in the September issue of the so-called Austrian Microwave Activity Contest which had some hot activity in and around Vienna organised by Fred OE8FNK. Several OMs activated Bisamberg (a hill at the north-eastern side of Vienna, Locator: JN88eh): Mike OE3MZC, Reinhard OE1RHC, Kurt OE1KBC, Stephan OE1SKV, Bernhard OE1BES, Alex OE1PEQ, and Alex OE1LZS. Other locations in Lower Austria with microwave activity were Rosalia (Locator JN87dr): Wolfgang OE4WOG, and Energieforschungspark Lichtenegg (Locator: JN87co): Erwin OE8EGK. The team of the Radio-Amateur-Klub of the TU Wien was active on the UHF-Band (70cm) and the X-Band (3cm) at rooftop level of our home QTH (downtown Vienna, Locator: JN88ee, 32m above ground level). The team members of the Radio-Amateur-Klub of the TU Wien were Horia, OE1BQH, Gerald, OE1GAQ, and Chris, OE1VMC. Fotos below show some of the wild fun we had. The score table for the September 15 microwave activity day is publicly visible here.

Horia OE1BQH on the X-Band 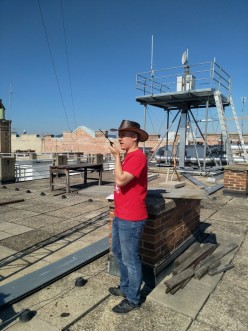 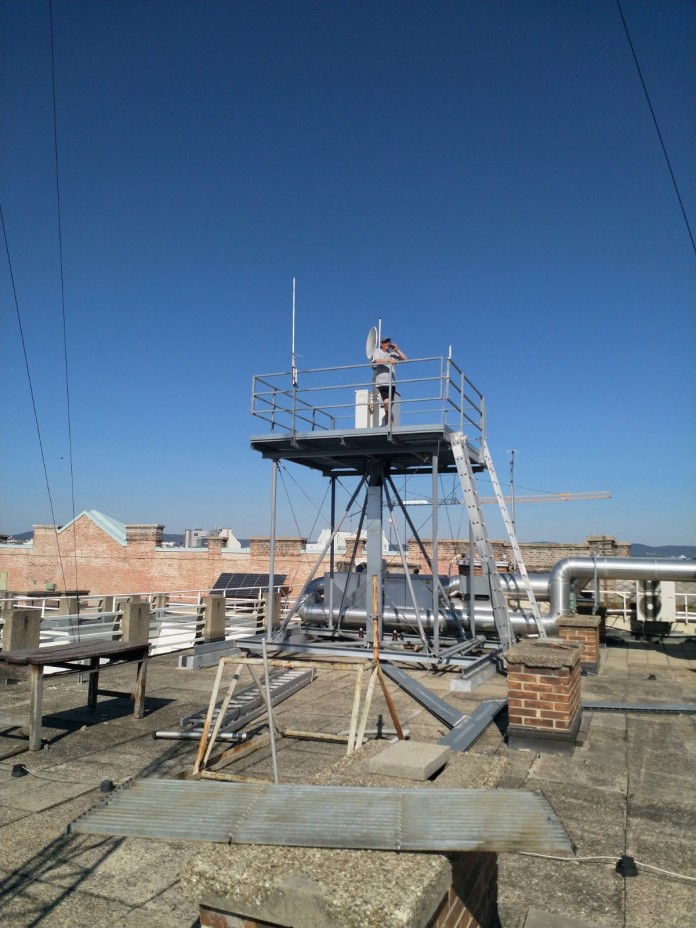 The general assembly of the „Radio-Amateur-Klub der Technsichen Universität Wien“ took place on Wednesday July 17, 2019. Seventeen club members met in the Seminar Room 389-2 at the Institute of Telecommunications. Club members were invited to bring along a (small!) piece of hardware or an introductory presentation slide. Please contact OM Chris, OE1VMC, in case you didn’t receive the invitation by email.

The X-Band Rig was recently boosted from 250mW to 4W transmit power. Edgar, Jakob OE1JMW, and Martin OE3UMB rewired the OE1XTU Rig and included the 4W power amplifier supplied by DB6NT into the setup. Together with the 57cm diameter offset dish, this yields  40 dBW (EIRP). After initial measurements, the Rig went on air. Several QSOs with  OE3A, OM3KII, OM3LQ and OE4WOG/p were logged on June 2 and two weeks later, on June 16, using SSB modulation. 73 de Chris

Since today, 16 May 2019, the Radio-Amateur-Klub of the TU Wien is connected to HAMNET. Daniel, OE3MZD, installed a suitable Wireless LAN router with directional antenna on the institute’s roof and established the bidirectional link between OE1XTU and OE1XTW at a data rate of approx. 100 MB/s. More to follow and congrats!